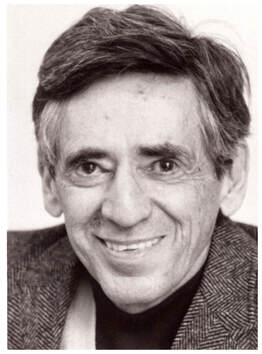 He was born in San Francisco on 1912. As a son of Augustin Lusinchi the editor of one of its French dailies, Le Courrier du Pacifique.
In 1933, he received a Bachelor of Arts degree and decided to pursue graduate studies in Paris at the Ecole Libre des Sciences Politiques.
He studied there for one year (1934-1935), during which time he was hired as a staff correspondent in the Paris bureau of the English news agency Exchange Telegraph.
During his years in the 1930s and 1940s as a foreign correspondent in Paris, he covered a variety of news (from French politics to sports, the Spanish Civil War), and was sent from time to time to Geneva to report on the debates of the League of Nations.
In 1936, he witnessed and reported on Haile Selassie’s speech asking the League to help his country against the Fascist invasion of his land by some 400,000 of Mussolini’s troops. Writing about this tragic moment 44 years later in the New York Times, he described it as “the most poignant commentary on the ineffectiveness of the League to deal with aggression” (11/16/1980, p. 16).
In 1937, he met the Parisian-born journalist Paulette Peyrot. The French news agency she worked for was located in the same building as Exchange Telegraph’s Paris bureau on the Boulevard Haussmann.
They got married in June of 1939. Shortly after the start of WWII, Exchange Telegraph closed its bureau in Paris and directed all of its news activities from its London headquarters. He stayed on in Paris and was hired as a war correspondent by the American radio network: Mutual Broadcasting System.
He covered the “drôle de guerre” (the phony war) and followed the government in its trek from Paris down to Bordeaux, in the face of the Nazi invasion. At that point, and fearing for the safety of his French wife, although he was an accredited newsman from a neutral country, he decided to return to the States.
Back in his home town, from 1941 to 1942, he got a news job at a local radio station (KGEI), where he worked as a bi-lingual editor and announcer.
KGEI’s news and features were broadcasted (in French as well) to the Pacific and the Far East. In 1942, he enlisted in the U.S. Army; he was sent to officer training school in Miami, and served as a Foreign Liaison Intelligence officer in the West Indies.
In 1946, he was honorably discharged with the rank of captain and received the Army Commendation medal for meritorious service.
He returned briefly to San Francisco, before being re-hired by his pre-war employer: Exchange Telegraph. After staying in the Paris office for a couple of months in 1947, he was sent to Geneva. He reported on the activities of the United Nations European headquarters, and on all other international organizations located there.
While in Geneva he also free-lanced for a number of news organizations (e.g. ABC, Sunday Times, Financial Times).
In 1949, along with a number of his colleagues, he was instrumental in founding the Association of Accredited Correspondents at the United Nations (ACANU) and was elected as the Association’s first president. In a way, the ACANU was a continuation of the Association Internationale des Journalistes Accrédités Auprès de la Société des Nations that had been founded in 1921, and of which he was a member.
In 1952, Exchange Telegraph decided to close their office in Geneva, and asked him to become their Paris bureau chief. He was responsible for the coverage of all diplomatic, political, economic, financial, sports, and general news in France and French overseas territories.
He was also sent to Geneva when important conferences took place, such as the one in 1954 that sought to resolve the conflicts in the Far East (Indochina and Korea).
In January 1957, Exchange Telegraph decided to discontinue its foreign news service. He decided to leave Paris and return to San Francisco.
While in San Francisco, he was contacted by the New York Times to become its foreign correspondent in Geneva. So, in the late summer of 1958, he was back in Geneva.
As the Times correspondent, from the early 1960s to the mid-1980s, he covered all the important international conferences (nuclear disarmament, nuclear test ban, etc.), and the international organizations headquartered in Geneva (ILO, WHO, etc.), and other events such as Stalin’s daughter move to the West, and Charlie Chaplin’s death.
He also free-lanced for a number of news organizations (print and radio), and towards the end of his career took up a side-line as a news photographer—he took pictures of numerous personalities, mostly from the diplomatic and political world coming through Geneva.
In 1969, which was the year of ACANU’s twentieth anniversary, the Association asked him to give a talk at the banquet that was organized to celebrate the occasion, with U Thant, the Secretary General of the U.N., as the guest of honor.
In the early 1980s, with his health failing, he kept working but at a reduced pace. Having been a heavy smoker for most of his life.
In the spring of 1985, he decided to go with his wife on a vacation to the South of France. On their way, in a hotel room, near Grenoble, one morning, he had a breathing attack brought on by the illness: his heart gave out and he died. He was 73 years old.

In 1969, which was the year of ACANU’s twentieth anniversary, the Association asked Victor Lusinchi to give a talk at the banquet that was organized to celebrate the occasion, with U Thant, the Secretary General of the U.N., as the guest of honor.

Special thanks to Dr. Dominic Lusinchi for donating ACANU these wonderful photos