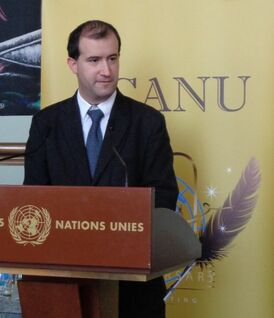 He has been working for almost 15 years for Keystone-ATS, previously as international reporter and as a newsroom coordinator.

He was also the Swiss correspondent for the french weekly Courrier international between 2004 and 2011.

He's also a former student of the MA in geopolitics from the University of Marne-la-vallée.

Aside from his mandates, he contributed to several Swiss and foreign publications (Le Monde, Slateafrique, la Cité...).

His various stories brought him to numerous countries and territories like the Gaza strip, Democratic republic of Congo (DRC), Ukraine or Bosnia and Herzegovina.

He's been consulted by several foreign medias and was invited as a guest speaker in several American universities.