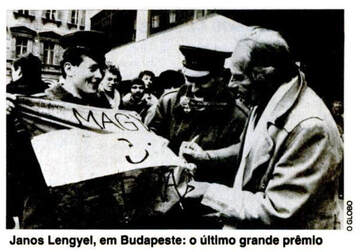 He was already a journalist when he emigrated to Brazil in 1940 and became a naturalized Brazilian. He initially worked at Correio da Manhã.

He conducted interviews with great personalities of his time such as the group The Beatles and the Russian cosmonaut Iuri Gagarin. He also stood out as a sports journalist, covering since 1950 all World Cups, Olympics and, mainly, Formula 1.
In the 60's he was accredited to the united Nations at Geneva and sent articles to Rede Globo, O Globo, and recorded bulletins for Swiss Radio International.

He joined ACANU and was elected 1972 and 1973 as president.
He suffered a heart attack during the premiere of the Hungarian GP. While recovering in Switzerland, he suffered another heart attack, this time fatal.
The press room of the Hungaroring circuit is named after him.
In 1969, he launched the book Do Enviado Especial (The Special Envoy) Edições Correio da Manhã.​