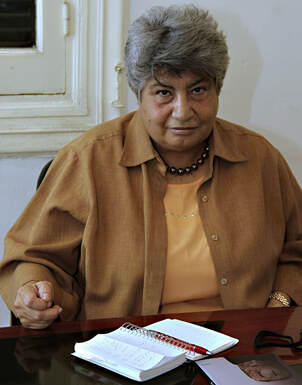 ​Hedayat Abd El Nabi is an Egyptian Journalist and the first African president of ACANU for 4 times.

She Started her carreer on 1971 covering Arab affairs and world issues for Al-Ahram newspaper in Cairo, Egypt then joined the UN Information Centre in Cairo 1993-1996, and was the Deputy Director, UN media focal point for the Gulf region.
In 1997 she moved to Geneva and worked for the UNHCR, as a senior information officer in charge of the Arab region.
Between 1999 and 2010 she was the head of the office of the Kuwait News Agency (KUNA) in Geneva.
During her Geneva years she founded with Blaise Lempen the Press Emblem Campaign (PEC), a Geneva based NGO with Special UN consultative status.
During her ACANU presidency years she created a computer room and TV lounge‬‏ for Journalists. She organised the first every ACANU trip to China and Egypt as well.

Now Hedayat Abd El Nabi is CEO and Editor-in-Chief of “People’s Rights” magazine, Deputy Chair of Association of Former UN Civil Servants and Member of the Board of the Egyptian Feminist Union.

hedayat AbdelNaby is the author of 2 books:
She received several Awards, among others: