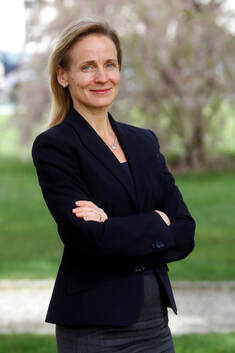 Gunilla von Hall is a foreign correspondent for the major Swedish daily newspaper, Svenska Dagbladet. She is based at the U.N. European headquarters in Geneva since 1988.

Ms. von Hall covers the United Nations, international and humanitarian affairs as well as economic and development issues. She regularly travels for stories on these topics in the field and in conflict areas.

Ms. von Hall is the former President of the United Nations Correspondent´s Association in Geneva (ACANU). She has also been a member of the Executive Committee of the Swiss Press Association (APES).

Thanks to her initiative as ACANU president2012/2013, ACANU organised a wonderful exhibition under the title “History as News” from the Josep Bosch Collection and with the support of theU.S. Mission, the Swiss and Swedish Missions to the UN.
The exhibit presents a collection of front pages from around the world documenting key events over the course of the past century – ranging from 1898 to 2012, and includes many newspapers published in the country where the event occurred.
“History as News” pays homage to the journalists who provided their accounts of these historic events and highlights the significant contribution of journalists over the years, the importance of press freedom and the need to protect journalists’ rights.

Regularly, Ms von Hall moderates debates and panels on international topics. Furthermore, she has contributed to three books. She has been published in the Swedish anthology "The War & The Truth", and her stories have been selected for the anthology ”Excellent Swedish Journalism”.
She was also published in the book “Family, Migration and Separation” in 2018. Ms von Hall has as well given a TedTalk on the topic “Risquer sa vie pour raconter la vérité” in 2018.
On 30 August 2019, ACANU honord Ms von Hall for her long-time ACANU's membership.