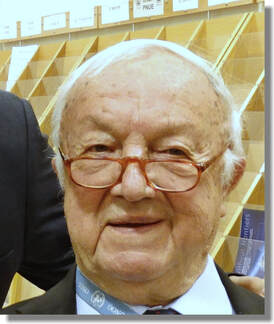 Gordon Martin 14.03.2014, © Tamer Aboalenin.
Gordon Martin, (1928 – 2016) started his career in Rome in 1955. He settled in Geneva in 1986 after passing through Africa, the middle east, South America and many other countries. He completed his career in 2014 as a correspondent for Vatican Radio.
He was one of the very active journalists in the UN and chaired ACANU.
As a formerly BBC and Daily Telegraph correspondent, he has always been at the forefront of reporting crises that have plagued the world for more than half a century.
He is honored by the Queen of England for his journalistic work and became OBE (Officer of the Most Excellent Order of the British Empire). In 2008 he was made honorary citizen of the City of Geneva.
Gordon Martin was known by using a 40 years old Remington typewriter which he never separated and never used a laptop.  He had no mobile telephone and admitted “I don’t understand a lot of modern gadgetry and I think sometimes gadgets get in the way of clear use of the English language.”
The Director-General of the United Nations Office in Geneva Michael Moller said after his death: "His passing marks the end of an era".
A journalist and his typewriter By Stuart Hughes, BBC News, Geneva 31 January 2014​