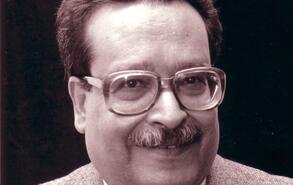 ​Gamil Attia Ibrahim (1937 - 2020) is an Egyptian journalist, great novelist​ and one of the pioneers of the Egyptian literary movement in the sixties focused on his writings on the social role of literature.

He began to publish some short stories before he started to work for the Egyptian ministry of culture in the early sixties.

In 1968, he founded with a group of poets and thinkers the periodical magazine, "Gallery 68", which was a voice of the modern Arabic literature.

He moved to Switzerland in 1979 and worked as a correspondent for several Arab newspapers and radio stations. The same year he joined ACANU. His writings, refined through his contacts with the international community at the United Nations in Geneva continued.

He was one of the few Arab journalists who closely covered the United Nations Office at Geneva in the eighties and nineties of the last century, especially the emergence of the World Trade Organization, peace negotiations to end the war in Bosnia and Herzegovina, disarmament conferences and the United Nations Conference on Trade and Development (UNCTAD).

He carefully monitored the impact of the collapse of The Soviet Union, the disintegration of the Warsaw Pact, the end of communism and how the ILO reacted to these variables.

Almost all his novels are a mixture of history and the influence of politics on social life. As seen in the trilogy 1952, monitoring the transformations in Egypt before, during and after the 1952's revolution.

A part of this literary work turned to a television series and was filmed within the United Nations in Geneva to be the first-ever Arab television work to be filmed inside the UN.

In the novel "descending to the sea", he observed the societal transformations that Egypt witnessed during the reign of President ِAnwar As-Sadat (1970-1981).

In his Novel the "barbaric issue", he addressed the international community's inability to redress the victims and how the force can be above the law, citing the failure of the United Nations to resolve the Palestinian issue.

In "Scheherazade on Lake Geneva", he monitors how the work of the UN organizations in Geneva is reflected in the various communities in the world.

He predicted in this novel the emergence of the negatives of globalization and the intrusion of international companies and violations of human rights, warning of turning the world into a forest and the expectation of social unrest or revolutions.
Egyptian Novelist Gamil Attia Ibrahim, 1937-2020
By Hedayat Abdel Nabi
Former ACANU President
2003-2005, 2006-2008

Gamil was my friend, an outstanding member of the Geneva press corps. An outstanding intellectual, novelist and thinker. Modesty was his style.
Among some 10 Arab journalists covering the UN in Geneva, Gamil was the quietest of them all.

Rarely would you hear his voice at the bi-weekly press briefings Tuesday and Fridays at the press briefing hall first floor above the press bar. However, his power of intellect was supreme. He was among 5 Egyptian journalists covering the UN in Geneva.

His analysis and discussions of the developments on the UN or world scale and in Egypt were remarkable.

Every Tuesday and Fridays we used to have our chats following the UN briefings, he would ask for his tea and me for my renverse, my favourite drink.

I do recall that before the January 25 revolution of Egypt as we sat in the press bar, he was about to travel to Cairo, and we discussed the situation and remarked. You know Gamil you might be witnessing history in a few days; the Egyptians might rise. And so, it happened and Gamil followed from his home the outburst of the revolution.

Born in 1937 in Cairo, Ibrahim studied in the Faculty of Commerce before he switched into the Academy of Arts. He had several different jobs in his early life: a clerk at a textile factory in Shubra El-Kheima, a music teacher for children, as well as a teacher of math in both Egypt and Morocco.

In Morocco, he met his wife Ruth and moved in 1979 with her back to Basel, Switzerland where he spent the rest of his family and professional life.

Author of some dozen novels, his 1952 was among his most well-known, tracing mid-twentieth-century transformations in Egyptian society. His acclaimed 1986 novel Down to the Sea was re-issued by Dar al-Karma in 2014.

Down to the Sea, the only one of his works translated to English, takes place in the City of the Dead during the Sadat era. His later novel Scheherazade on the Banks of Lake Geneva drew on his long experience around the UN.

I will continue to say goodbye to Gamil, my friend Jimmy, I miss him since I left Geneva on September 11, 2011. What will remain amazing about him is how his character expressed such modesty while he in his field as a novelist was an outstanding famous writer in Egypt and in the Arab World.

Today, when he is no longer there, may I express my sincere condolences to his family, to his wife, Ruth the love of his life, and to ACANU.

Gamil Attia Ibrahim was like a bird that always flies, tweets and does not settle down anyway.
He had an Egyptian heart beating with his own philosophy, love and a mix of feelings connected with his motherland.
He was worried about the "deformation of Egyptians memory, their identity, and their culture".
He said to me one day, "When a nation loses its memory, it is easy to be led, and it does not move forward or hold together because a nation without memory is a nation without identity."
When I met him for the first time in Geneva, he said "hello and welcome to the forest of the globalization," I smiled, then he  said, "Perhaps you may understand what I could not understand decades ago".
Gamil is gone, and his deep-seated human outlook remains covered in a noble, smiling face.
Tamer Aboalenin, 12.04.2020
عم جميل