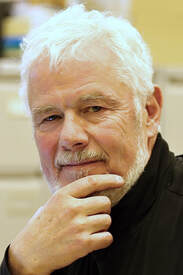 Born in New York, and brought up in the Bahamas, Canada, Germany and the United Kingdom, Edward Girardet is a Swiss-American editor, journalist, documentary film producer and author currently based between Geneva and Bangkok. As the fourth generation in his family, he attended Clifton College in England for his formative high school years.
He studied German Literature at the University of Nottingham and the Free University of West Berlin.
On receiving his BA, he moved to Paris where he became a foreign correspondent for United Press International and later as a freelance for NBC News and other media. He was also based for six months at the United Nations in Geneva for NBC during the late 1970s.
Girardet first focused on general reporting in France and other parts of Europe, but soon specialised in humanitarian and war reporting.
He has covered major crises in Africa, Asia, Europe and elsewhere since the late 1970s. As a journalist for The Christian Science Monitor, US News and World Report and PBS TV’s MacNeil/Lehrer NewsHour, he began covering Afghanistan three months prior to the Soviet invasion in December, 1979. He also produced a highly-acclaimed 94-part African Journey series travelling overland from Cairo to South Africa and reporting on a range of political, social, environmental and economic issues.

Girardet has worked on numerous TV current affairs and documentary programs for major European and North American broadcasters featuring such subjects as the war in Angola, lost tribes in Western New Guinea, Medecins sans Frontieres around the world as well as environmental and cultural issues in Africa and Asia He has won a number of awards including a nine-month Journalism in Europe Fellowship in Paris plus a year-long Master of Studies in Law/Journalism (MSL/J) at Yale Law School in the United States.

​Girardet was co-founder of Media Action International, a Swiss media foundation that developed needs-based ‘lifeline media’ public outreach and journalism training initiatives in conflict and humanitarian crisis zones. This closed in 2003 for lack of core funding following nearly 10 years of operation in different countries around the world and with partners such as the BBC.
While broadly supported by various international donors ranging from Sweden to the UK, it never managed to incite sufficient interest amongst the Swiss.

Girardet is author or editor of half a dozen books, including:
Somalia, Rwanda and Beyond; Populations in Danger (MSF); Killing the Cranes – A Reporter’s Journey, Through Three Decades of War in Afghanistan. (revised edition 2012) French edition: Il Parait Que Vous Voulez Me Tuer. (Les Editions Arenes, Paris, 2014).

He is also founding editor and contributing writer of The Essential Field Guide to Afghanistan which has now been published in four fully-revised editions (1998 to 2014).  Girardet is currently working on his first novel.

Girardet is editor, publisher and a foreign correspondent of Global Geneva magazine, www.global-geneva.com a print and online publication focusing on United Nations and International Geneva issues ranging from humanitarian response and conflict mediation to culture, world trade and climate change.

The magazine combines compelling writing with critical but quality, solutions-oriented journalism. He talks regularly on radio and television, including BBC and NPR, plus lectures at universities and other institutes in Europe and North America. He also acts as a media advisor for different organizations and undertakes journalism training both in Europe and developing countries.