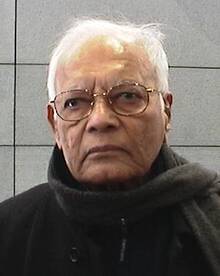 Mr. Chakravarthi RAGHAVAN is a distinguished member of ACANU and doyen of the UN press corps in Geneva.
He has had an extraordinary career and has also authored several books and specialized essays.
Currently, he is Editor Emeritus, South-North Development Monitor SUNS and a Trade analyst and consultant.
He was President of UN Correspondents Association, New York in 1967. He later set up the South-North Development Monitor SUNS in Geneva, which is among the most widely read news media among diplomats in the city. He was the Chief Editor of SUNS (1980-2005) and of Third World Economics (1990-2005) in Geneva. He represented the Third World Network in Geneva and was the Correspondent of Inter Press Service News Agency (1978-1990) and International Foundation for Development Alternatives (1978-1989).
Earlier, Mr. Raghavan was the Editor-in-Chief (1971-1976) of the Press Trust of India, which he served in various roles since 1947, including as its Special Correspondent at New York covering the UN and North America (1962-71).

​He is a prolific writer and his books and publications include: Recolonization: GATT, Uruguay Round and Third World (1990); 'The New World Order - A View from the South' (1997); 'World Trade Order: Advantage for Whom?' Third World Economics (1994);, 'Role of Multilateral Organizations in the Globalization Process,' Third World Economics, No. 128 (1996); 'The World Trade Organization and its Dispute Settlement System: Tilting the balance against the South', TWN Trade and Development Series No 9 (2000); Financial Services, the WTO and Initiatives for Global Financial Reform (2010); From GATT to the WTO: The Secret Story of the Uruguay Round, Third World Network Penang (2000); Developing Countries and Services Trade: Chasing a black cat in a dark room blindfolded (2002) TWN  Penang; Disconnects at all levels, Third World Economics 403, June 2007.