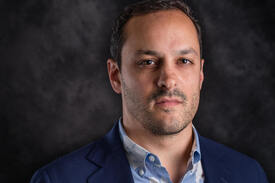 Brad Klapper is an American journalist who worked for the Associated Press (AP) for 13 years (2005 to 2018), covering many of the biggest stories in world affairs and reporting from more than 70 countries. He served last as the AP’s national security editor in Washington, overseeing the newswire’s U.S. military, diplomacy and intelligence coverage.

As a journalist, he was State Department correspondent during the tenures of Secretaries of State John Kerry and Hillary Clinton, breaking major news stories on the Iran nuclear deal, Syria civil war, Arab-Israeli peace efforts, U.S.-Cuban rapprochement and U.S.-Russian relations. He came to Washington from Geneva, Switzerland, where he focused on global trade and economics.

Klapper was an award-winning writer and editor Klapper has a B.A. in History from Haverford College in Pennsylvania, and a Masters of Advanced International Studies from the Diplomatic Academy in Vienna, Austria.

He was the recipient of the 2009 Deadline Club award from the New York Society of Professional Journalists for a one-year investigation into child-mined gold in West Africa and its entry into the international banking system and jewellery markets through Switzerland.

That story also was part of a larger Associated Press series on the exploitation of children in Africa that was a runner-up for the Pulitzer Prize.

He also was inducted in 2017 as a member of the Diplomatic Academy of Vienna Alumni Hall of Fame.

Brad is now senior vice president of media relations at Qorvis Communications and is responsible for managing some of the world’s most significant national and international public policy issues. His primary focus is on providing strategic counsel and executing media outreach for key clients.