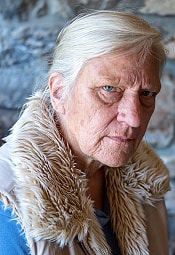 ​Accredited from 1980 to 1999 to the UN in Geneva for the danish news paper Morgenavisen Jyllands Posten except for four years living in London.
She was born in Soenderborg, South Denmark, visited Danmarks Journalisthoejskole  (School of Journalism) in Aarhus,1967-68 and Columbia University, School of Journalism, New York, 1977-78

In the 1970s, she worked for the danish newspaper Kristeligt Dagblad, (Christian Daily) in Copenhagen.

One day,  in 1971 she was asked to write on relief to refugees from Bangladesh. This was her trip outside Europe to India on a plane with no seats but tons of powder milk and dry biscuits.
It became a stay of many weeks in Calcutta with reporting on the refugee crisis and the war between India and Pakistan.
A meeting with Mother Teresa had a profound effect on the direction of her work.

Travelling 1972 in East Africa on a month long “Nordic Journalist Visit” to Kenya, Tanzania, Malawi and Zambia where journalists from the four Nordic countries were received by the presidents. This was the start of extensive Nordic development aid cooperation with the four countries. She later worked two years for Danida, Danish Foreign Ministry.

While travelling alone for months in Asia, she met a refugee, Leo from Laos in Mindanao, an island in the Southern Philippines. He was a Catholic and Laos had just been taken over by a communist government so he did not dare return home. He said: “You have to help me. You are the only one who can do it. There are no other foreigners on this island” ,( Mindanao, then as now, a region marked by violence).
So she did.
A few months after coming home she received a prize for her articles. The sum of the prize money was doubled by a reader who liked the story about Leo.
He eventually got accepted as a refugee and the money helped him getting settled in Canada.

While in Lebanon for Kristeligt Dagblad reporting on the civil war, beginning of 1977, she met her Swiss husband. He is the reason she settled in Geneva and started writing for Jyllands Posten.

One of the unusual stories she filed from the UN was about an anonymous letter sent to the Danish mission in Geneva. She may well have been the first journalist to learn about this letter. It was accusing the high commissioner for refugees of misusing funds from Danida.
After many articles on this case from most UN correspondents, the high commissioner had to leave his post. A Danish director was suspended from the UN, a first at this top level.