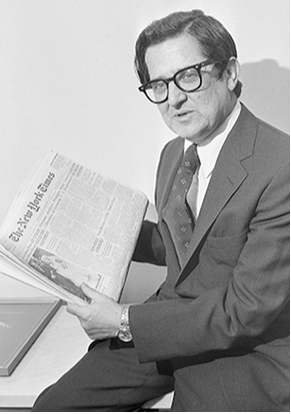 Photo: AP/New York Times
Abraham Michael Rosenthal was known to his colleagues as Abe, and to his readers he was A.M. Rosenthal, but regardless of what he was called, he was the man who led The New York Times through a transformative period of growth, modernization and major change.

He was a member of ACANU between 1959 and 1963 , a Pulitzer Prize-winning foreign correspondent for his outstanding series of articles about Poland, the Polk award, the award of the New York Newspaper Guild and the the Overseas press club award for his fine reporting.

He was honored by the City College of New York in 1962 with a Townsend Harris Medal and in 1981 with the John H. Finley award. in 2002 he received the Presidential Medal of Freedom at the White House.

According to The New York Times,  the Joan Shorenstein Center on the Press, Politics and Public Policy, part of the John F. Kennedy School of Government at Harvard University has created a writer-in-residence program named for Times former executive editor, A. M. Rosenthal.

Rosenthal was a columnist, and someone who began his almost 60-year career at The Times as a campus correspondent while at City College and rose to become executive editor of what has arguably been the world’s most influential newspaper. Throughout that time, while overseeing more changes to the paper than any editor in its history, his commitment to the highest standards of journalism remained rock solid.

He was born in Ontario, Canada, on May 2, 1922. His family moved to the Bronx when he was still a child. Following graduation from DeWitt Clinton High School, he enrolled at CCNY, joined the staff of The Campus and in 1943 was appointed campus correspondent by The Times.

A year later, while needing only a few credits more for his degree, he was hired as a staff reporter by The Times and quit school to devote himself fully to the job. In 1949, he was awarded his bachelor’s degree, and in 1951, he became a U.S. citizen.

In the early 1950s, Rosenthal was assigned to cover the United Nations in New York and in 1954 he became a foreign correspondent, assigned to New Delhi. Four years later, he was transferred to Warsaw. His articles about Poland, which described a nation suffering in the grip of Communist controls, contained material that the censored Polish press could not publish.

In 1959, the Polish government expelled him for writing “very deeply and in detail about the internal situation, party and leadership matters. The Polish government cannot tolerate such probing reporting.” The following year, he was awarded the Pulitzer Prize for International Reporting. In the years to come, under his leadership as editor, The Times won 24 Pulitzers.

After leaving Poland, Rosenthal reported from Geneva as well as other cities in Europe and Africa, then was assigned to Japan for two years and traveled frequently throughout Asia and the South Pacific before returning to New York in 1963 to become metropolitan editor. Almost immediately, he began to transform the staff, expanding the scope of its coverage, emphasizing investigative journalism and asking for articles written with flair and imagination.

He enlarged the weekday paper from two to four sections, adding discrete metropolitan and business news sections, and launched a national edition. His goal was to brighten the paper, give it a fresh look, and make its articles more readable, while maintaining its essential quality of serious reporting.

While he was in command, The Times covered such complex issues as the civil rights movement, the war in Vietnam, Watergate, and crises in the Middle East. In 1971, when The Times came into possession of the Pentagon Papers — a 7,000-page secret government history of the Vietnam War — and risked fines or even jail sentences for publishing classified material, Rosenthal and publisher Arthur Ochs Sulzberger argued fiercely for publication. After three articles, the paper was hit by a federal injunction, forcing it to halt publication. The Times appealed to the Supreme Court, arguing that the government failed to make a case for “prior restraint,” and the court agreed. The Pentagon Papers made history, and in 1972, The Times was awarded a Pulitzer Prize for Public Service.

In 1986, as he approached The Times’s mandatory retirement age of 65, Rosenthal stepped down as executive editor to become a columnist. In January 1987, the first of his twice-weekly “On My Mind” columns appeared. The last one ran in 1999, and after more than half a century with The Times, Rosenthal reluctantly left. But he wasn’t quite done. In 2000, he began writing a weekly column for The New York Daily News, finally retiring in 2004. Two years earlier, he had been awarded a Presidential Medal of Freedom, the nation’s highest civilian honor, for his “outspoken defense of persecuted Christians in Asia, Africa and the Middle East.”

​Rosenthal died on May 10, 2006, shortly after his 84th birthday and after more than 60 years of career. Some of his friends described him as "Passionate, brilliant and aggressive" CBS News called him "the legend of the NYT". His grave marker carries these words: “He kept the paper straight.”